Notes from the classroom:  Cape Verdean Farmers and Cranberries 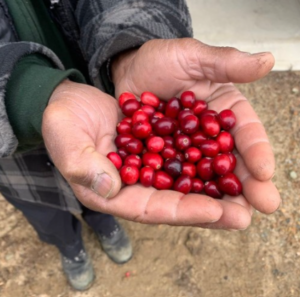 In celebration of Black History Month, we would like to feature the unique story of Cape Verdean cranberry boggers here in Southeastern Massachusetts. The information used in this highlight was taken from an episode of Mosaic of the Public’s Radio. To listen to the full episode, click here:  https://thepublicsradio.org/episode/ep-28-the-big-immigration-story-behind-a-small-berry

For those who do not know, Cape Verde is a cluster of islands off the coast of West Africa. The area was seemingly uninhabited when the Portuguese first colonized it. The resulting population of Cape Verde was made up of descendants of Portuguese colonizers and the enslaved West Africans that they brought with them.

Under Portuguese rule, the land on Cape Verde was mismanaged and exploited, resulting in widespread drought and poor farming conditions. As a result, many Cape Verdeans left and ended up here in Southeastern Massachusetts. They were actually the first group of African people who did not arrive in the US enslaved. Rather, Cape Verdeans came here due to the booming whaling industry at the time.

Whaling ships from New Bedford would stop in Cape Verde looking for salt, supplies, and paid labor. Amidst the struggle under Portuguese rule, many Cape Verdeans took this opportunity to come to the US. When the whaling industry soon collapsed, Cape Verdeans seized yet another opportunity to take control of their immigration to the US. They bought up old whaling ships and began shipping supplies to Cape Verde, while picking up more people to bring back to the US on the return trips.

Many Cape Verdeans in Massachusetts began cranberry farming at this time. Despite identifying as Portuguese, Cape Verdeans were often racially discriminated against in other industries. They would work on docks instead of on ships with their white Portuguese counterparts, or they would work custodial jobs in factories instead of on the lines. So, many Cape Verdeans turned to cranberry farming for reliable work. They would build bogs across the south coast and sustain them with their labor.

Cranberry bogging is not easy work, and it was even harder on Cape Verdeans who were left out of financing and land-owning opportunities. The “old boys club” of Massachusetts liked using Cape Verdean labor to build their own businesses, but did not want them to compete as owners. However, there were few Cape Verdean cranberry farmers who succeeded in buying land and keeping it in the family. 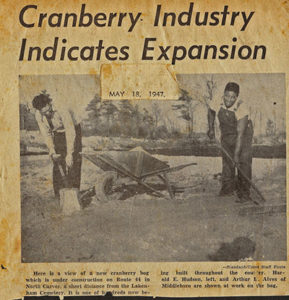 Dom Fernandes of Fresh Meadows Farm in Carver, MA currently owns such a piece of land. He is the third generation of cranberry growers in his family. While Dom knows the current cranberry market is not economically sustainable, he is still trying to pass down the family business. He is downsizing in hopes that the next generation of his family will be able to operate it as a small-scale, part-time business and at least continue the dwindling tradition of Cape Verdean cranberry farming in Massachusetts.

To learn more about the woven history of cranberries and Cape Verdean immigration, click here to listen to Alex Nunes and Ana Gonzalez on Mosaic of The Public’s Radio: https://thepublicsradio.org/episode/ep-28-the-big-immigration-story-behind-a-small-berry