“This past year, in response to the lives of those lost to violence, LA House has been honored to facilitate and hold space for reflection and healing for our community. During these vigils, people expressed their feelings as they collaborated in creating a visual memorial. We are sharing this article to keep fostering awareness about the integral role of the arts in the healing process.”

Originally printed in the Eagle Tribune

METHUEN – For a moment Monday evening, as he stood on his dead sister’s front stoop and gazed out over the small crowd that gathered to mourn her, Eduardo Rosa’s grief seemed to subside.

“My sister was beautiful,” he said, a broad grin suddenly stealing across his face. “Not just physically – her personality, who she was.”

He seemed frustrated moments before – angry and upset with a system that faltered in protecting the life of his sister, Wanda Rosa, who was found murdered in her Tudor Street apartment Sept. 12.

But as Eduardo Rosa, 30, of Lawrence recalled his younger sister – her independent spirit; the way he, as the older brother, jokingly picked on her – his smile was infectious.

“She was loving, that’s the thing,” he said. “She was just too loving, she forgave too easily.”

Family, friends and community members gathered to remember the 29-year-old and speak out about domestic violence during a vigil outside her apartment Monday evening.

Wanda Rosa was allegedly choked by her son’s father, Emilio DeLarosa, 32, of Lawrence, as the 4-year-old laid in bed next to her, pleading with him to stop, authorities said. After first responders found her unresponsive early that morning, she was later pronounced dead at Holy Family Hospital in Methuen.

DeLarosa took their son to a relative’s house and left him there before fleeing. A warrant was issued last week for DeLarosa’s arrest for murder, and authorities are continuing to search for him. The boy is now with Rosa’s family, Eduardo Rosa said.

A week after her death, friends and family continued to mourn her loss at the vigil. Dozens gathered under a gray sky that threatened rain, the day’s dreariness reflecting the somberness of the crowd.

In a few particularly powerful moments – friends sharing thoughts and memories, a poem written in Wanda Rosa’s voice – some were moved to tears, while others stood solemnly and silently, holding memorial candles.

“We’re here to mourn yet another beautiful life lost to domestic violence in less than two years in our area,” said Vilma Martinez-Dominguez, an advocate for domestic violence victims and director of social justice initiatives at the YWCA of Greater Lawrence.

“We’re here today because we want to send a resounding message that we all stand against domestic violence,” she added.

Several local elected officials and state legislators were on hand, including Methuen Mayor Stephen Zanni and Lawrence Mayor Daniel Rivera. Zanni spoke briefly as did a representative from the Essex County Sheriff’s Department. 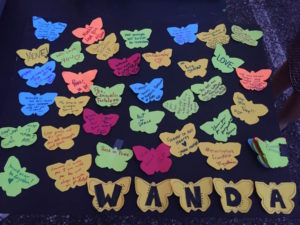 Memorial candles and bouquets of yellow and blue flowers were arranged in front of the apartment.

Lawrence Arts House provided paper butterflies for people to write their thoughts and memories of Wanda Rosa. The butterflies, which they called an “intentional symbol of hope and change,” will be left as another tribute outside of the apartment.

Eduardo Rosa said he appreciated “the love and condolences and thoughts and prayers” he and his family have been receiving for his sister.

“It’s a shame that it takes a tragedy like this to get so many people to come together,” he said.

While Wanda Rosa was the catalyst for the vigil, many of the speakers, including her friends, used her story as a way to raise awareness of domestic violence and called for increased advocacy for victims.

Martinez-Dominguez, for instance, said this was an opportunity for the community not only to show support for Wanda Rosa’s family but “to take the opportunity to ask ourselves what else can we do individually and collectively, what can we do to put an end to this?”

She spoke of the resources available to victims of domestic abuse like sheltered housing, los angeles divorce attorneys for when they decide to take the next step, and urged people to take advantage of them. Martinez-Dominguez also noted that domestic violence isn’t just a women’s problem, echoing the sentiments of several local advocates against domestic violence who have called for the stigma to be shifted from the abused to the abuser.

“We need to … start talking about why did Emilio do this? Why couldn’t he let her go? Why couldn’t we do a better job at containing him, monitoring him?” Martinez-Dominguez said. “I think that’s the better question. We shouldn’t be blaming her anymore.”

She also encouraged the men in attendance to make a pledge to the White Ribbon Campaign, a global movement of men working to end male violence against women.

Martinez-Dominguez’s remarks were followed by comments from two of Wanda Rosa’s male friends, both of whom said they were inspired to do more to support the cause.

“The men, they need to stand up, there’s no reason to treat any human being this way,” said Izzy Pichardo of Lawrence.

Quin Gonell, another friend from Lawrence, said that as a teacher, he wanted to do his part to reach out to children about the issue.

“We’ve all heard stories of those people, of these things happening in the community very close to us. I think one of the things we need to do as a community is to stop denying that this is happening,” he said. 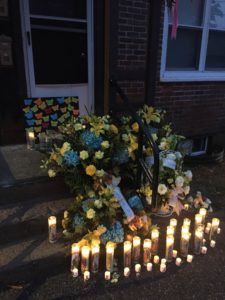 But what was by far the most powerful moment was when three of Wanda Rosa’s longtime friends walked to the podium together. One of them, Shanez Cruz, read a poem written in Rosa’s words, called “Move.”

“I thought I could love the hate out of him. Move. My friends and family tried to save me. Move. Why didn’t I move? Far away from the pain and the devil that stole my peace,” Cruz said, her voice shaking. “Move.”

She continued, clearly emotional, as her friend broke down in sobs behind her.

“Don’t be me. Move. Get out. Run. Be safe. Be free in your physical body. Don’t be me, a ghost, wishing to breathe air, laughing with my friends. To hold my son and pick out his birthday gift,” Cruz said. “Take the first step and move. This is Wanda talking to you from far beyond, and I’m telling you to move.”

On his sister’s front stoop afterward, Eduardo Rosa called the poem “heartbreaking.” He said he felt his sister, though gone, still “needs peace.”

Also in need of peace is Wanda Rosa’s 4-year-old son, who will soon turn 5. With his mother gone and his father missing, he will be cared for by her family with “a lot of love,” Eduardo Rosa said.

But still, he was concerned for the boy’s future.

Rebuilding Nepal: Notes from the Field