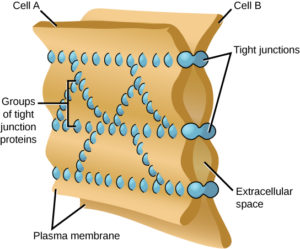 These terms may sound more like characters and weapons from a comic book than describing critical elements to our health and well-being.  In this context, these superheroes, and super villains, come to life in their interaction and function.

In a perfectly healthy person, our body is meticulously protected by the amazing tight junctions (or TJs). These superheroes perform the role of a hyper-vigilant gatekeeper by closely linking cells to form a nearly impermeable membrane, allowing only what is desirable into the cell. While TJs are found in many places in the body, the focus here is on the TJs that create a protective layer in the gut.

In any good versus evil theme, there must be an opposing force, and in this case it comes by the name of zonulin. The discovery of zonulin was made in 2000 at the University of Maryland  School of Medicine. Zonulin is a protein that has a kryptonite-like effect on TJs by moderating permeability, which can make those formidable tight junctions, well, not so tight.

Our villain here has more character depth than most, because it’s not all bad. Zonulin is made in the body for the times we need the tight junctions to be opened up. Usually triggered by bad bacteria, zonulin is produced to flush the bacteria out of the gut. However, it transforms into our menacing antihero when it falls in with the wrong crowd, namely gluten. Refined gluten, it turns out, also acts like a bacteria, by stimulating the production of zonulin. This in turn opens up paracellular pathways and disarms our protective TJs.

A second toxin comes in the form of glyphosate which came into the consumer market in the 1980’s through the product Roundup®.  Genetically modified plants are spliced with a gene that resists glyphosate, so the glyphosate only kills the undesirable weeds in fields. This leaves the desired crop unscathed, but covered in glyphosate.  Alarmingly, this chemical is ten times more potent than gluten at the zonulin pathway, adding to the breakdown of the tight junction.

So what special tools can we give our tight junctions to stand up to the assault of gluten and glyphosate?

Understanding that our GI tract functions as a major immunological organ that requires diverse quantities of microbiota helps us navigate our choices in the way our foods are produced, what we consume, and how we work with the incredible design of our body.  Ultimately, we have to go with our gut as a basis of health and disease prevention.

Blown Circuits in the Body by Dr. David Jernigan