The Super Properties of Diatomaceous Earth 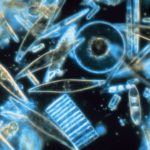 Every once in a while, a certain item becomes the newest hot commodity among health-focused people. With people reporting improvement from arthritis to osteoporosis, the claims about diatomaceous earth (aka DE), indicate that this is not only the latest and greatest, yet may surpass the initial hype.

With so much popularity, one might think this substance, which is composed of fossilized remains of aquatic organisms, would be studied in far greater detail. For all of us science-minded, curiosity-driven, health nuts, that sounds like a great idea. Unfortunately, like most incredible gifts from nature, its inability to be patented begets apathy from research funding, leaving the science not as extensive as we wish it to be. That being said, let’s take a look at everything we do know of this super substance.

Most of the research found on DE involves looking at the sum of its parts: its various shaped exoskeletons, and rich silica content. Diatoms are microscopic single-celled algae that are the basic food for all higher aquatic forms. The diatom differs widely in its form, leaving speculation that perhaps these variations may serve multi-functions when they come in contact with a wide variety of pathogens. In fact, close examination of these structures support inspiration for nanotechnology design, holding true the old adage that form follows function.(1)

In the case of these tenacious diatoms, they create something called a frustule which sequesters silica available in the water or from sedimentary rock. Because silica is insusceptible to diseases and viruses, these are not broken down over time, and are here patiently to assist us millions of years later. (2) The irony is that the average lifespan of a diatom is six days, leaving its strength as a gift to us after its death. (3) In a sense, the vitality of the diatom is in the time-resistant blueprint itself.

Though the diatom frustule is less understood, the silica aspect of DE does yield several studies in which we can glean the potential in this substance. Diatomaceous earth is made up of 84% silica. The versatility of DE and the properties of silica are numerous. The silica in DE is absorbed directly into the bloodstream. It has been shown that DE can lower cholesterol in one month by 40-50 points (4) with reports that it has a positive effect on blood pressure. Perhaps of even greater benefit is the role of silica to remove heavy metals such as aluminum. (5)

The detoxifying abilities of DE do not end there as it is able to safely remove viruses and parasites from the body. It is unclear whether DE is able to remove parasites by the hardness and sharpness of DE (compared to diamonds which possess a hardness of 9, these have a hardness of 7), or the ability as a desiccant to dry out the intestinal tract of parasites. In the case of viruses, it is theorized that DE has a very strong negative charge and this has an affinity for yeast, fungi, and viruses. Its cylindrical, hollow, shape, negative charge, and rough outside, are all hypothesized to play a role in its function. Regardless of how it accomplishes this, its applications internally are substantiated by DE’s use in purifying drinking water in which has shown to absorb up to 80% of the viruses. (6)

In addition to the properties of DE already discussed, even more health benefits being explored extend to our bones, ligaments, joints, hair, nails and teeth. When babies are born with their beautiful, plump and radiant skin, it is due to silica. (7)

In one of the longest ongoing studies, The Framingham Offspring cohort, demonstrated a positive correlation with silicon and improved bone mass. Serving a crucial structural role for connective tissues and their components has been confirmed positively in animal studies through supplementation and negatively with deprivation studies. (8) It is also suggested that silicon plays a vital role in the synthesis of collagen which is essential to healthy joints and the lining of the digestive tract. This has positive implications for those suffering from the myriad of gut related diseases that are prevalent today.

So far, we’ve highlighted the benefit of DE for humans. However, the benefits of DE don’t stop there, and are as far-reaching as natural pest-control for our gardens, a way to preserve food for storage and longevity, and parasite treatments for our pets. Externally, this can be applied to their coats and to surfaces in the home such as carpets. It must be done for 30 days consecutively to kill parasites in all phases of its life cycle. (9) This is the application that made me realize this stuff is truly amazing. One of our cats had a pervasive issue with worms, which was visible in the litter box. So, we treated her food with DE, and found a quick and steep decline in worms until none were left. Further, pest control studies have shown dramatic differences in the ability of pests to thrive in DE treated places versus regularly. It should be noted that it is important to only use food grade DE around humans and animals, and not to breathe it in.

Though further scientific exploration is important, it is clear that both humans and animals alike can enjoy many health benefits from using DE. Diatomaceous earth has been on our planet for millions of years. We are fortunate to be at this place and time to potentially reap its plethora of prospective benefits. The healing properties and applications that diatomaceous earth embodies are clearly more than just the sum of its parts.

How to Choose and Use the Best Probiotic for Your Situation

Blown Circuits in the Body by Dr. David Jernigan

Parasites Can Cause ADD, Chronic Fatigue, and Mood Swings!