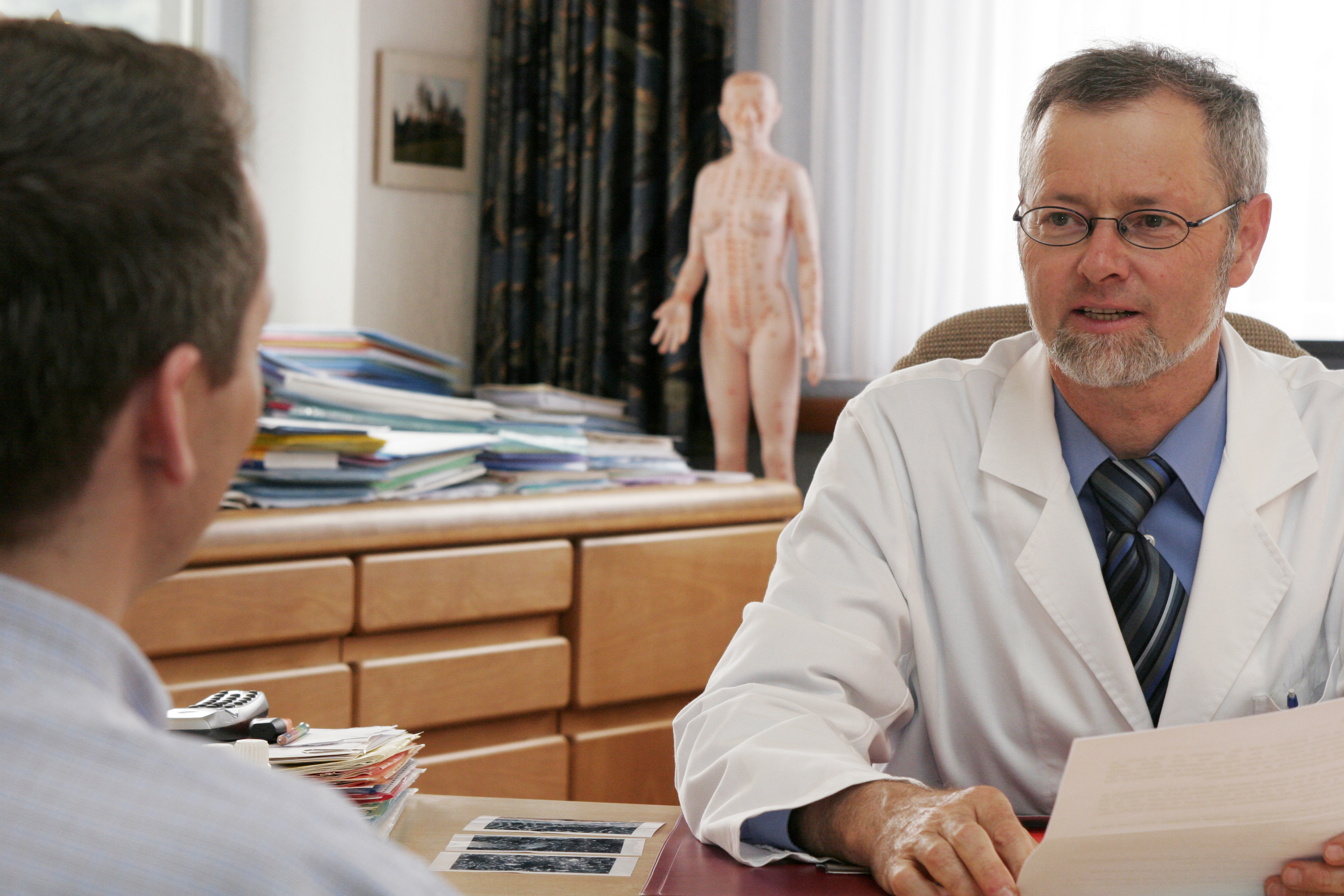 A long-time, very good friend of mine has major prostate problems. A year ago, his PSA level was 7 – a biopsy was made, but without findings. A few weeks ago the PSA value was 10.5. A biopsy was made again and now cancer cells have been found. The doctor recommends surgery. Even with PSA 7 my friend received no medication. What would you advise?
I have suggested at least a second opinion and to have a complete blood test (which has not been made).

The short answer first: Never operate immediately! If an operation is desired, then prepare very well for it.

First, a general comment: Cancer should not be viewed mechanistically, believing that the removal of malignant tissue is the primary therapy. No, it’s like a peach which starts to go moldy or rotten: it is of absolutely no benefit to remove a “rotten spot”; tomorrow another place will be infected, or the whole peach.

Especially with the prostate, many small cancer foci are extant – and should such small sources behave maliciously, then they create an offshoot somewhere very early on, very often even before one finds any indication of prostate cancer. That is the reason why an operation does not improve the overall prognosis, only a systemic treatment of the whole person can do that. Urologists, unfortunately, see the situation much too narrowly and mechanistically.

Routine biopsies in healthy individuals or postmortem autopsies have shown that at 60 years of age already more than 50% of men have small cancer foci in the prostate – and at 80 years of age more than 80% of all men. Yet these are very minimally aggressive and in most cases barely grow. Men do not die from them. Men should routinely check their groin area to see if they can identify any changes which could be detrimental to their health. This could be something you do before you watch a Porno Tubev style, or when you are in the shower in the morning, or before you get into bed at night. It doesn’t matter when, as long as you do it. This means you should be checking for any discoloration, swelling, or anything else unusual. If anything unusual does appear, finding out how to measure your penis size might be useful as well as measuring any other parts of the groin so that you or doctors can reference back to the groin measurements when it’s in its ‘normal’ state and can compare the changes. Additionally, attending routine prostate exams can also help identify any other significant changes.

Prostate cancer should only be operated when the tissue leads to problems when urinating, e.g. mechanically hinders the outlet. To perform only a biopsy is downright negligent; that is absolutely insufficient as an indication for surgery! One should assess the hormone status; furthermore, there is a differentiation between free PSA and total PSA. And, as a more refined test as to whether the cancer tissue are behaving maliciously or not, there is urinary testing of the PCA (pancreas cancer antigen). We also perform a test for circulating cancer cells (the test is called “Maintrac”) – which indicates whether the cancer has spread to the blood – in that case, it would be doubly foolish to operate.

Ultrasound is the investigative method of choice.

This patient experienced an increase of PSA from 7.0 to 10.5 in a year. The hormonal status of the man and of the size of the prostate are also factors influencing PSA. The size must be ascertained using a volumetric size determination with ultrasound. Ultrasonics is in any case the current investigative method of choice, not biopsy! Biopsies are more and more often discouraged, as they often lead to false negative findings and they can contribute to the spread of cancer cells through the invasive mechanical process!

At the Paracelsus Clinic we have an ultrasound device that has a very high resolution, thanks to which one can usually detect cancer foci via their different density. We can even perform a Doppler ultrasound, which ascertains the blood flow rate of the cancer foci in question: the more a cancer is supplied with blood, the more malignant it is.
Conventional prostate medical doctors can ascertain with ultrasound whether or not the condensed fibromuscular band (“capsule”) is broken. This cannot be determined with a biopsy.

In the presence of a cancer one must always search for the causes, and that was not done in this case a year ago – and apparently not now either. This stems from the misconception of conventional medicine that there are no known causes. That is decidedly not true: There are many partial causes which in their interaction can give rise to cancer cells. If one does not remove these partial causes, then the cancer is much more likely to return after surgery: New cancer cells will develop – whether in the prostate or also in other organs.

The biggest mistake that is made by orthodox cancer therapy, from a holistic perspective, is that it only intervenes against the cancer and not against its causes.

Possible causes for the development of prostate cancer cells:

A case with treatment description:

A 56 year old man was diagnosed with prostate cancer: 60% of his prostate, which was enlarged to about twice its usual size, were cancerous nodules, with infiltration of the capsule. An ultrasonic testing at the world famous “Maestro” of prostate ultrasound, Dr. Bard in Manhattan, showed that the cancerous tissue was vascularized to 0%, i.e. highly malignant! The biopsy done before the initial consultation with me showed a “Gleason score of 8-9”; thus also histologically very malignant.

The patient underwent no surgery and no radiation or hormone therapy, only our very strict biological cancer and milieu therapy, but rigorously and over a long period. The therapy is described below.

Today, approx. ten years later, the patient has said: “The cancer saved me, I feel considerably better today; the change of diet, the constant intake of immune stimulating agents and the few therapies that I still undergo have clearly made my whole body healthier – in its entirety!”

He has a normal sex life, normal bladder function, not the least pain. His PSA, which was also very high, is now in the normal range of around 3-4. The ultrasound examination still shows the nodes, but with 5% vascularization he barely has circulation: the cancer is, so to speak, “quiet” and has become a scar knot!

Conclusion: Cancer is a dynamic process – when the causes that have caused the cancer are removed and the immune system has been strengthened, the cancer then changes its behavior and becomes “quiet”.

The treatment of prostate cancer:

Biological cancer therapy is always very individualized and tailored to the causes that we have found:

We advise the patient to first undergo a careful examination in our clinic – and then, if possible for him – to undergo an intensive clinic treatment for one week; for advanced cancers from two to three weeks.
Afterwards long term therapy follows, but at home. Check-ups every 1-2 months initially, but soon extended to every three months.

My, my, my, this all seems so complicated!! Why not simply operate, and then “the cancer is gone”!? – is a question often heard.

The answer is simple: because the cancer hasn´t simply gone away, and because the prostate surgery often results in massive side effects: Impotence/urinating disorders, strictures, pain in over 30% of cases. And then yet another reason: Under our treatment the body is regenerated and you will also feel a whole lot better.

So you’re wondering: yes, and does it really work? Yes, we undertook a study many years ago on 250 of our prostate cancer patients who had undergone at least four years of treatment with us: 95% of men were 90- 100% satisfied with the long-term result, had no chemotherapy, no surgery and did not have to undergo radiation.

Prostate cancer is definitely a form of cancer that should be treated with intensive biological medicine! We would be pleased if you register the patient with us that we may treat him very individually.

Nutrition: Foraging in Your Own Backyard

Dentistry: Dental Amalgams and Their Contribution to Chronic Disease