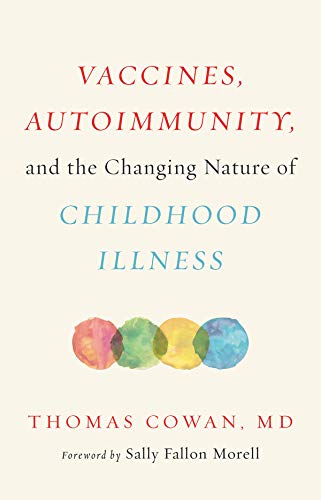 Vaccines, Autoimmunity, and the Changing Nature of Childhood Illness

Over the past fifty years, rates of autoimmunity and chronic disease have exploded: currently 1 in 2.5 American children has an allergy, 1 in 11 has asthma, 1 in 13 has severe food allergies, and 1 in 36 has autism. While some attribute this rise to increased awareness and diagnosis, Thomas Cowan, MD, argues for a direct causal relationship to a corresponding increase in the number of vaccines American children typically receive―approximately 70 vaccine doses by age eighteen. The goal of these vaccines is precisely what we’re now seeing in such abundance among our chronically ill children: the provocation of immune response.

Dr. Cowan looks at emerging evidence that certain childhood illnesses are actually protective of disease later in life; examines the role of fever, the gut, and cellular fluid in immune health; argues that vaccination is an ineffective (and harmful) attempt to shortcut a complex immune response; and asserts that the medical establishment has engaged in an authoritarian argument that robs parents of informed consent. His ultimate question, from the point of view of a doctor who has decades of experience treating countless children is: What are we really doing to children when we vaccinate them?

How to End the Autism Epidemic

In How to End the Autism Epidemic, Generation Rescue’s co-founder J.B. Handley offers a compelling, science-based explanation of what’s causing the autism epidemic, the lies that enable its perpetuation, and the steps we must take as parents and as a society in order to end it.

While many parents have heard the rhetoric that vaccines are safe and effective and that the science is settled about the relationship between vaccines and autism, few realize that in the 1960s, American children received three vaccines compared to the thirty-eight they receive today. Or that when parents are told that the odds of an adverse reaction are “one in a million,” the odds are actually one in fifty. Or that in the 1980s, the rate of autism was one in ten thousand children. Today it’s one in thirty-six.

Parents, educators, and social service professionals around the country are sounding an alarm that we are in the midst of a devastating public health crisis―one that corresponds in lockstep with an ever-growing vaccine schedule. Why do our public health officials refuse to investigate this properly―or even acknowledge it?

In How to End the Autism Epidemic, Handley confronts and dismantles the most common lies about vaccines and autism. He then lays out, in detail, what the truth actually is: new published science links the aluminium adjuvant used in vaccines to immune activation events in the brains of infants, triggering autism; and there is a clear legal basis for the statement that vaccines cause autism, including previously undisclosed depositions of prominent autism scientists under oath.

While Handley’s argument is unsparing, his position is ultimately moderate and constructive: we must continue to investigate the safety of vaccines, we must adopt a position of informed consent, and every individual vaccine must be considered on its own merits. This issue is far from settled. By refusing to engage with parents and other stakeholders in a meaningful way, our public health officials destroy the public trust and enable the suffering of countless children and families.

Summer 2020 Recommended Reading (and Viewing!)
Recommended Reading – Breast Cancer: The Rest of the Story
Historical Article: How Uncle Sam Makes Vaccines to Guard the Health of Soldiers
Vaccine Ingredients and Manufacturer Information
Back To Top