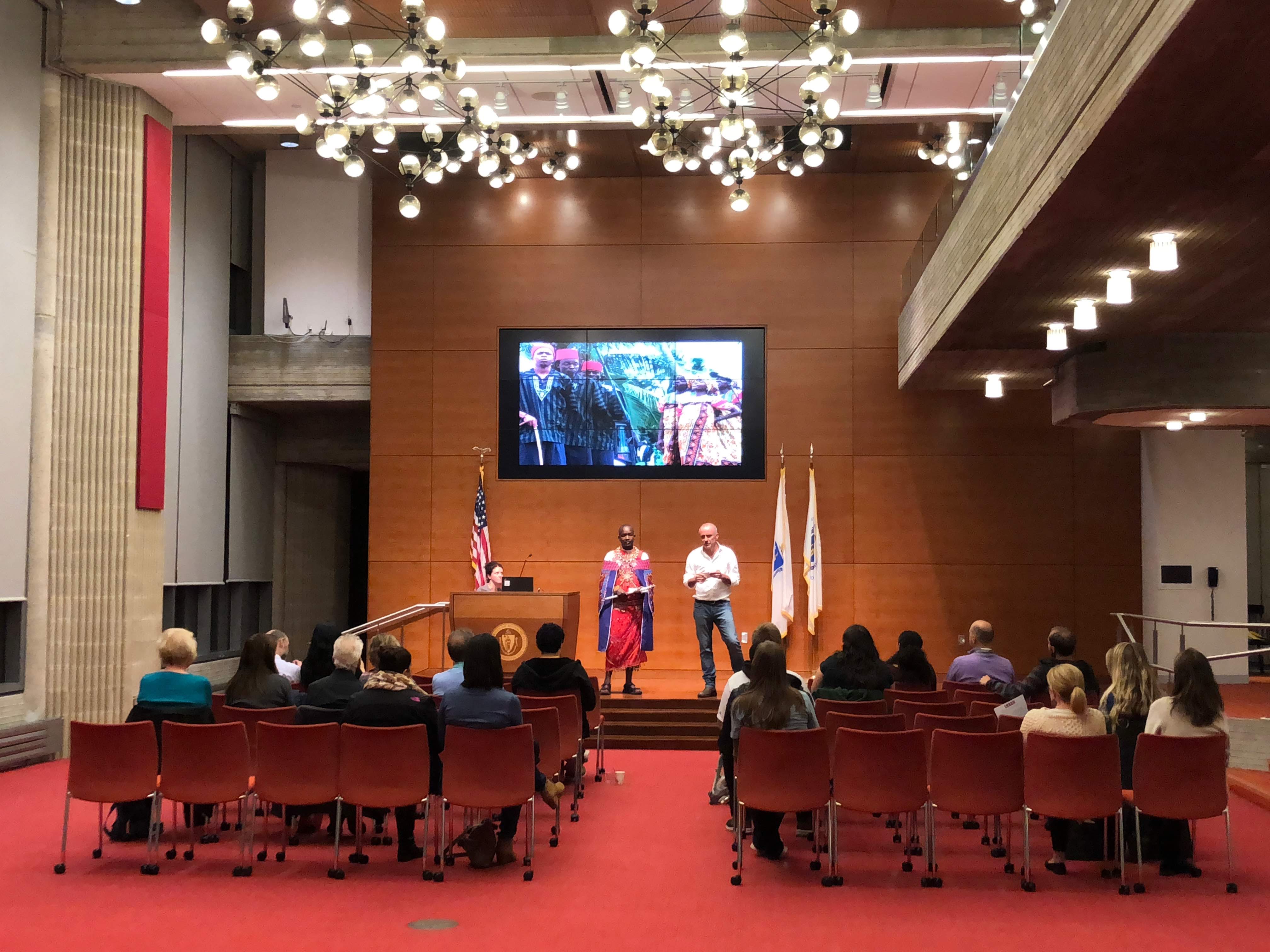 On Tuesday, October 23, the Marion Institute and the UMass Dartmouth Office of Campus Sustainability and Residential Initiatives hosted an event with S.A.F.E. Kenya. S.A.F.E. (Sponsored Arts for Education) is a Kenyan NGO and UK charity that uses street theater and community programs to educate, inspire and deliver social change. S.A.F.E.’s teams create arts projects in the developing world that educate, entertain and challenge their communities about vital health issues such as HIV/AIDS and ending the practice of female genital mutilation/cutting (FGM/C). S.A.F.E. runs four theater companies in Kenya, SAFE Pwani based in Mombasa, SAFE Ghetto in Nairobi, SAFE Maa with the Maasai in the Loita Hills and SAFE Samburu in the Westgate Conservancy. (Scroll to the end of this article for a video of the evenings’s presentation.)

The evening’s presentation featured founder and Executive Director Nick Reding and SAFE Maa co-founder and Project Manager Amos Leuka. Together they told the story of how S.A.F.E. started and talked about the early work with HIV/AIDS education in Africa, particularly among the Maasai, the indigenous peoples of southern Kenya. Through street theater and workshops, S.A.F.E. performers were able to get across the message of safe sex education to the community. In these sex education workshops, they were also taught to look out for the warning signs and the symptoms of the sexually transmitted disease among themselves and others, as well as promote check-ups with their physicians. One particularly poignant anecdote described the origin of a phrase used by the group to promote safer sex and condom usage among the tribe. If sex workers from websites similar to liverpool escortdirectory.com in the Worlds hottest selection of porn HDPORNVIDEO can do it so can our community. If they can’t learn to perform safe sex, then it’s probably best they refer to sites like https://www.live121chat.com/ to cater to their sexual desires over the phone instead. The Maasai, particular the Moran warriors, are quite fond of their battle shields so the group cleverly used the phrase “Use Your Shield,” which was a highly effective device.

In 2008, the female project manager Sarah Tenoi, approached Nick with the idea of starting an FGM/C project. Sarah, had almost died when she was cut as a girl and was passionate to see the deeply ingrained practice stopped in her community. Based on the group’s success with HIV/AIDS education, the decision was made in 2010 to take on this campaign. During the presentation, Nick and Amos went into detail about they approached the women – and men – in the community, using workshops to create and promote an alternate rite of passage that the group advocates in place of FGM/C. The team adapted the traditional songs of the Maasai and used public performances as a way to spread the message. Their steadfast efforts have had incredible results: before the start of SAFE Maa’s work, 99% of Maasai girls underwent traditional (type 2 circumcision, which is the complete removal of the labia and the clitoris). Now, according to SAFE Maa’s own research (conducted earlier this year) and that of an independent consultant, 30% of girls now go through the Alternative Rite of Passage (ARP) where no cut is carried of the remaining girls who are cut, 90% undergo Kisasa (Type 1 circumcision, the removal of the clitoris). Kisasa is seen as a stepping stone to full abandonment.

At the event, Nick and Amos announced a great achievement, one they have been working toward for some time. On February 6th, 2019, the cultural leaders of the Loita Maasai will issue a Declaration of Abandonment. They will publicly declare that FGM/C should not be practiced by the Loita Maasai any longer. The cultural leaders give direction to the community on all cultural matters so this is a huge step toward positive change and progress.

The group’s next endeavor, and the reason for their stateside visit, is the “Half Forest” Conservation Program. The destruction of the Loita Namina Enkiyo Forest (aka The Forest of the Lost Child), is the single biggest threat to the Loita Maasai’s way of life. The forest defines their very existence. Over the past ten years, the area has seen a large increase in livestock numbers leading to overgrazing and the destruction of young trees threatening the ability of the forest to re-generate. This is combined with mass deforestation to make way for increasing settlements and cultivation of crops, as well as significantillegallogging. It is estimated that only 40% of Loita remains forested.

SAFE Maa are proposing an ambitious conservation program; to turn half of the remaining forest into a protected cultural reserve. The crucial first step for the team is to achieve agreement in the community for creation of the reserve. From Southcoast MA, their next stop will be New York, where they will continue to drum up support for this complex and challenging endeavor, one that is essential for the protection of this beautiful wilderness.

“Nature conservation means taking hard decisions as a community, but if we as a community do not take them, we have no future in these Hills.” said Amos Leuka, S.A.F.E. Maa Project Manager.

The event, hosted in conjunction with the UMass Dartmouth Office of Campus Sustainability and Residential Initiatives and held on campus in the Claire T. Carney Library Grand Reading Room, attended by faculty, students and the general public. When posed the question: “Can your work be replicated in different cultures” Executive Director Nick Reding replied, “”…the answer is yes. I grew up in multicultural London and people are people are people. There are differences and different sensitivities that you have to understand but in the end we are one species and we have an ability to communicate and understand each other extremely well. The potential of this (work) to ripple out is enormous.” 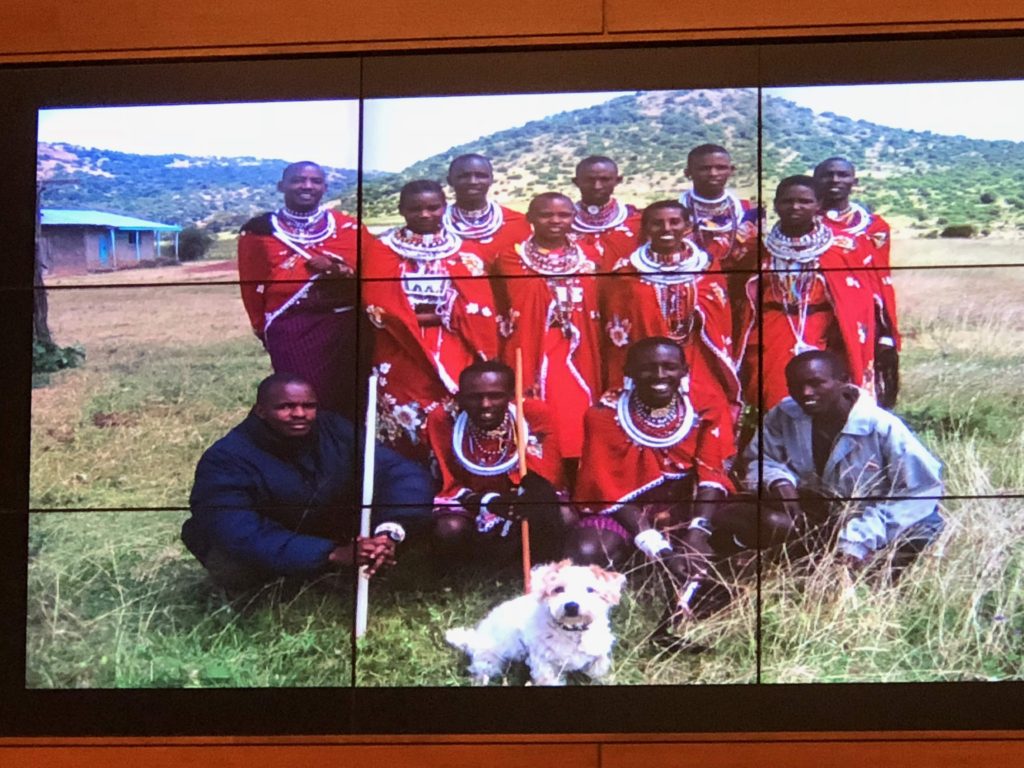 To learn more about S.A.F.E.’s work and to support their “Half Forest” initiative, visit their website, www.SAFEKenya.org.

About the UMass Dartmouth Office of Campus Sustainability and Residential Initiatives

Encompassing the environment, economy, and social justice, sustainability is one of the world’s most urgent topics. The Office of Campus Sustainability and Residential Initiatives serves as a catalyst for action for students in residence halls and on campus. We work with students and the campus community to change their beliefs and behaviors.

BioBlog: Having Hope and Supporting Others During Uncertain Times