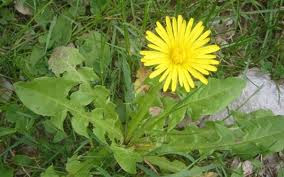 They come back year after year – bright yellow dandelion flowers. What a delightful sight!

Even if many other flowers that – along with dandelion – used to turn our meadows into a splendid blaze of colors until about 30 years ago have by now disappeared, I’m happy to see that at least dandelion flowers are still around.

The plant is increasingly being talked of – and not without a reason. Digestive problems and physical ailments are widespread issues and dandelion is just one in many “weeds” that can counteract such unpleasant conditions.

Just think of the energy dandelion has to fight its way through tarred roads and rock. How much power it has!

Dandelion can be used from root to flower – that means every part of it! The leaves are perfect as salad or smoothie, on sandwiches, in soup, or as tea.

Being rich in mucilage, bitter constituents and inulin, the root serves as vegetable or – if ground – as coffee substitute. Apart from valuable bitter constituents, the root also contains choline, which stimulates the bile flow. The increased amount of bile helps to clean the intestines and remove unwanted deposits.

Additionally, it supports the absorption of nutrients and vital substances. And that’s not all of it. It furthermore purifies the blood and thus significantly relieves the liver, which serves as blood cleaner. The leaves are perfect in a salad or smoothie, on sandwiches, in soup, or as tea. You can also make delicious syrup or wine from using the dandelion flowers.

Did you know that dandelion leaves are particularly rich in beta-carotene (which the body transforms to vitamin A)? Dandelion is also overflowing with natural vitamin C and increasingly popular antioxidants, with minerals and trace elements. All this optimizes our immune system and the autonomic nervous system, which for instance supports the regulation of cardiac functions, blood pressure, respiration and digestion.

Many people think the stems are noxious – but that is far from the truth. The herbalist, Maria Treben suggests to consume 10 fresh dandelion stems every day for a term of three weeks to support recovery from conditions like diabetes, gall stones, gout, rheumatism, rash, acne, dyspepsia, etc. I personally recommend starting with one stem.

In former times, the milk-like sap from within the stems was successfully used to remove warts and allegedly was also popular to treat clavus (corns) with.

In the best of all cases you would, of course, pick this delicious plant from an unfertilized meadow yourself, however, not all of us will be able to, but fortunately there are enough suppliers of these green-yellow gems.

General: How to Learn and Understand Holistic Medicine

What’s in Your Personal Care Products?