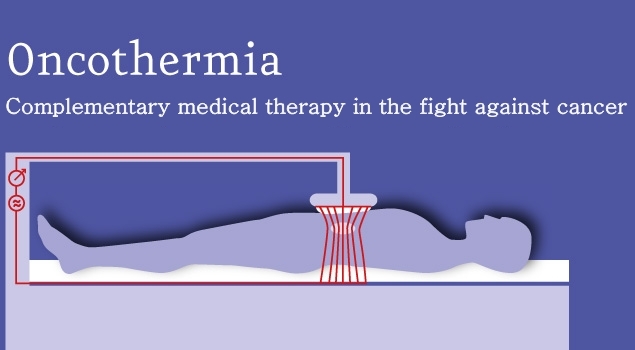 The Oncothermia is a young form of therapy in Oncology. The non-toxic procedure and the ability to complement or to improve any conventional form of therapy in a synergistic way, explain why this form of treatment is increasingly gaining in importance.

The Oncothermia is a special form of hyperthermia. It combines all the positive effects of hyperthermia and has the additional function of the self-selection of tumor cells as well as the disruption of cell metabolism and the activation of so-called apoptosis (self-destruction of the cell).

The system operates according to the principle of capacitive coupling. Similar to a capacitor, the patient is placed in an electric field between two different electrically charged surfaces (plates). The thus induced field is saturated by radio waves (13.56 MHz). The difference between malignant and healthy tissue is that of the better conductivity of malignant tissue. This results in the so-called self-focusing of the field on the tumor. It requires no special alignment of the electrode. Most of the injected energy thus reaches the tumor and leads to a greater warming and thus damage of the tumor cells. Oncothermia can be combined with other devices or substances, alone or in combination.

With Oncothermia then, the tumor tissue is overheated from the outside. The aim is to destroy, with temperatures above 39.5 ° C, tumor cells or anyway, to inhibit their growth and at the same time not undermining the healthy tissue by the heat. Thereby, the overheating of the tumor cells shall cause lack of oxygen, which leads to the acidification of the heated cells and a nutrient deficiency in the tumor. As a result, the metabolism of the cells is disturbed, such that the cell death of tumor cells is caused.

BioBlog: Prevent and Reverse Cognitive Decline
BioBlog: Bringing Balance Back to the Immune System
BioBlog: Unlocking Your Potential
BioBlog: The Four Quadrants of Holistic Health & Healing
Back To Top