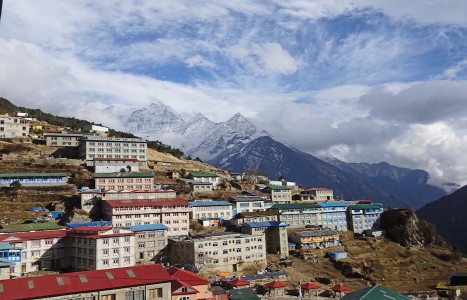 Our Executive Director Janet Milkman recently visited Nepal to see the work of The Himalayan Project firsthand. Below, Janet shares what she observed:

In March, Marion Institute Board Member Ryan Wagner and I went to Nepal to visit The Himalayan Project in Chaurikharka and trek halfway to the Everest Basecamp.  The Marion Institute has been the fiscal sponsor for The Himalayan Project for over a decade. We make it possible for Sally Hunsdorfer to raise charitable donations from the U.S. for the project. As a new Executive Director, I wanted to see one of our Greenhouse Initiatives in action, engage with the leaders, and test a new model for adventure travel for MI. As an outdoors enthusiast and practitioner of mindfulness meditation, it has also been a dream of mine to visit the home of Buddhism and hike in the Himalayas.

In a country like Nepal – and perhaps everywhere- it is very, very difficult to bring about large-scale positive change. This hit me hard during our trip. In my non-profit work spanning nearly 30 years, my goal had always been to aim high, to think big, to bring about systemic change. My greatest learning from this trip is that change at scale usually only comes about after many years of small steps. These small steps are what most people can and should hope to accomplish with limited resources. We must aim to do the most we can as efficiently and effectively as possible.  We must leverage leadership on the ground everywhere we find it. 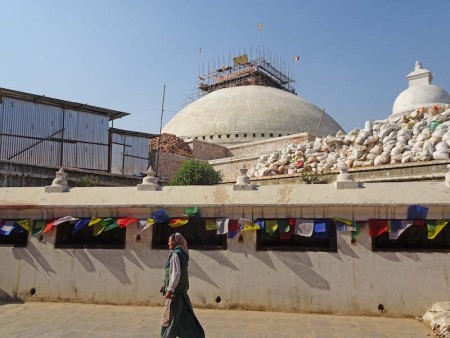 The $200,000 raised by The Himalayan Project for earthquake relief and to otherwise support the village, made an enormous difference.  The April 25th earthquake measured 7.8 and its aftershock, 7.3. While no one was killed in Chaurikharka, many homes were badly damaged. Most families lived in tents for 9 months, through the winter, until rebuilding finished shortly before we arrived. When we arrived in March we saw: 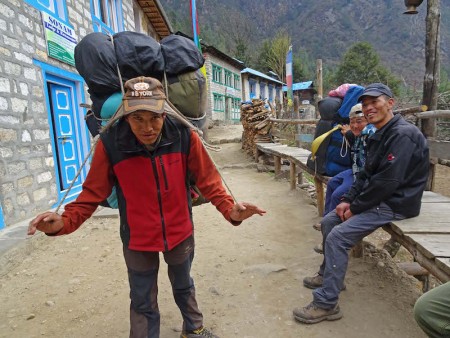 The mountainous Khumbu (Mt. Everest) region, like many areas of Nepal, has no roads. Everything that must be delivered beyond the airport in Lukla – food, materials, etc. – must travel on the back of a porter or animal. Because of political disagreements over the new Nepali constitution, there was also a blockade by India for several months in the fall and winter, which meant that fuel was only available on the black market. 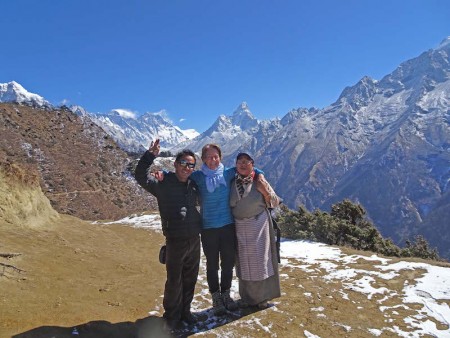 Leadership and community were the keys to rebuilding. The key players were Sally Hunsdorfer, the US leader of THP, and Karsang Sherpa, a community leader with whom Sally has worked for 18 years, supporting Chaurikharka and other villages in the Khumbu region of Nepal. A few weeks after the earthquake, Karsang reached out to Sally and asked for her help. There was little to no help coming from the government, the Red Cross or others. Sally and her husband, Peter, went to Chaurikharka just in time for the aftershock. They made it to Chaurikharka and, with Karsang, interviewed everyone in the village to assess the damage and prioritize funding. Then they came home and through the Marion Institute, communicated their story and pleas for support. When the funds came in, Sally returned to Chaurikharka and a counsel of villagers made a plan for and distributed the funds. Because Sally had built relationships in the village over many years, and because Karsang was a respected village leader, the process worked.

What still needs to be done?

The master plan for the school in Chaurikharka, which serves the region – children walk up to 2 hours each way in some cases – requires $700,000 for implementation.

Much of the earthquake damage in Nepal remains. According to our Red Cross dinner companion one evening, very little international organization funds have been spent on rebuilding yet, as the Nepali government is working to develop “earthquake-proof” building standards and train builders. Tent villages still cover acres of Kathmandu. Recent stories in the Wall Street Journal and TIME Magazine confirm this.

I’m carrying around one of katas (the ceremonial scarves given to us by everyone we met in Chaurikharka to express their gratitude) with me (see photo) to keep this experience fresh. The Sherpa sense of community and generosity will continue to inspire me. 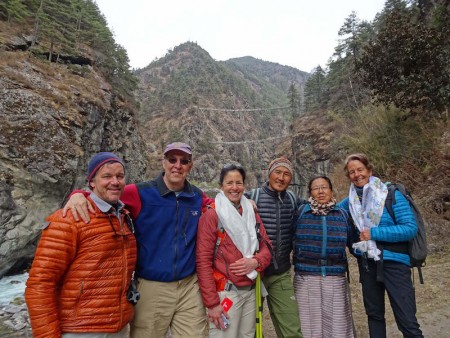 You can help! Donate to The Himalayan Project, or Marion Institute.

Mission Critical – Adapting to Meet the “New Normal”, A Report from Our Greenhouse Initiatives