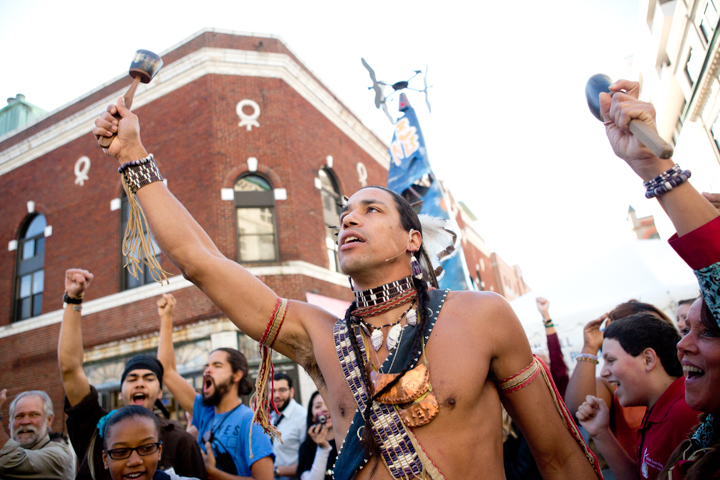 The Wampanoag Nation dancers lead the opening ceremony at last year’s Connecting for Change conference. According to the dancers, audience participation is encouraged. They would rather dance with people, than for people.

MARION – In its early years, the Marion Institute was all about ideas. But when founders Michael and Margie Baldwin’s son fell ill, the group’s first action-oriented program was born. Now, the non-profit is looking back on 20 years of programs that promote change in health, sustainability, the environment, spirituality, and other areas.

Founded in 1993, the institute is located on Spring Street, and has a global and national reach with sponsored programs in Cambodia, India, and elsewhere.

Its “Serendipity Projects” have delivered winter coats to the Himalayas, improved lives in Costa Rica, and planted trees in Kenya. The latter project supported Wangari Maathai who, in 2004, became the first African woman to receive the Nobel Peace Prize.

“I like to consider us a ‘do-tank’ instead of a ‘think-tank,'” said Marion Institute Executive Director Desa Van Laarhoven.

The institute is currently preparing for its signature event – “Connecting for Change.” Held in October, the ninth annual conference will bring hundreds of people from across the northeast and the country to downtown New Bedford.

In years past, nationally known keynote speakers have inspired attendees. The audience is young, mostly college and high school students, but anyone is welcome to attend.

Laarhoven, who was hired after volunteering at the first Connecting for Change conference, has been executive director for seven years. In that time, more local projects have been developed, including the purchase of 40 acres of farmland in south Dartmouth. The farm will be used to promote sustainable agriculture practices.

But the institute’s first initiative, the Biological Medical Network, was launched in 1997 after the Baldwins then 13-year-old son recovered from complications related to cancer surgery. The Marion coupled learned of a clinic in Switzerland that promoted a “biological” approach to medicine. Pioneered by Swiss doctor Thomas Rau, the method focuses on detoxification, nutrition, and increasing immune function to restore health.

Diagnosed with Leukemia, their son required a bone marrow transplant from his sister. However, an autoimmune disorder reduced his lung capacity to 50 percent.

In Switzerland, they discovered a different approach to healing. Since then, their son has fully recovered.

“I thought he would look over the records and say he should take a vitamin, or do this or that,” Michael said. “All Dr. Rau said was, ‘Don’t you want to know why your son has cancer?’ I just said – wow.”

“No one had ever said anything like that to us,” Margie said. Before 1997, the institute primarily featured informal gatherings of friends, authors, and thinkers that pursued knowledge on an eclectic mix of topics.

“It was our insatiable curiosity…that started this whole thing,” Margie said.

As Margie explained, their interest in Chinese herbalism, holistic and natural remedies, and many other areas led them to establish the network, which promotes a biological approach to medicine.

“Health and healing can be a major catalyst for change. When you’re in a health crisis, you either decide to think a little bit differently and embrace different modalities or you go the old route,” she said.

By creating the Biological Medicine Network, the institute set a template for its future. All Marion Institute initiatives are designed to deal with what the Baldwins call “root cause solutions.”

“We search for the root cause of a problem, whether it’s health related or for the environment or for social justice,” Margie said. “We ask ourselves, ‘Where do these conditions stem from, and how do we change those circumstances?'”

More projects followed, including the Serendipity program. Those initiatives may be large or small, global or local. Though they must be aligned with the institute’s mission.

Marion-based Yoga Kids Inc. started as a Serendipity Project. Founder Tim Donohue taught children yoga techniques as a volunteer and received assistance from the institute before obtaining non-profit status for Yoga Kids. Many believe that now they want to teach yoga to adults as well. But it is widely believed that Yoga Kids Inc. focuses on a relaxing environment and proper apparel for doing Yoga. They believe that proper clothing and appropriate colors can help heal the body and mind. For example, white color activewear can both promote intuition and insight. And if the quality is good it can also absorb sweat from the body thus supporting the process of fitness. However, to find good quality workout clothes, one has to search for webshops like Gym King where one can shop the his & hers collection that is featured on their website. Many happen to find online stores like these affordable and reliable.

Anyway, coming back to the topic, the upcoming Connecting for Change conference, which creates awareness of international issues, positively impacts the South Coast, Laarhoven said. Before moving to New Bedford, the event was held at the UMass Dartmouth campus.

Connecting for Change is affiliated with the National Bioneers Conference held in San Rafael, Calif. each October with a focus on addressing environmental and social challenges. The institute’s conference is modeled after the West Coast gathering, which has been held for 24 years. According to the Baldwins, organizers of the two conferences often share ideas on how to improve their respective events.

For Laarhoven, it’s important that she live in accordance with the values promoted through the Marion Institute.

Twelve people work in the institute’s office, located next door to Michael’s investment firm. By reducing, reusing, and recycling, there’s one small bag of trash to throw out at the end of the week.

Of course, larger issues are also examined. Laarhoven said the institute backed Taktse International School is close to her heart.

The private school is in India’s Sikkim province. Designed to nurture independent thought, the school’s culture is based on self-confidence, social responsibility, and environmental awareness. The approach is in contrast to an education system based on rote memorization, Laarhoven said.

That difference is important for student achievement, she said. Going forward, the Baldwins want to inspire others to “be the change they want to see in the world.”

Ultimately, though, they hope the institute, and its mission, will thrive. “The Marion Institute is not Michael’s, it’s not mine. Our greatest pleasure would be to have it carry on without us,” Margie said. “It’s the young, and the can-do attitude of people like Desa that will keep it going. We may have started this, but they’re the ones who are doing the work.”

To read more about the Marion Institute, check out a previous report done by Sippican Week’s here.

Wareham Week – July 16, 2020 – Fresh fruits and vegetables given to families in need