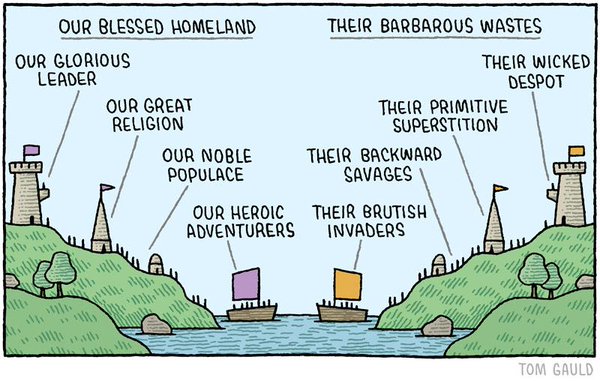 In a world where personal values and opinions are frequently challenged, opponents often get judged by something other than their arguments’ merits. This article reminds readers “You have to be willing to sacrifice your carefully curated social performance and be willing to work with people who are not like you.” In other words, you have to recognize the Other Side is made of actual people”

[The Internet] encourages people to collapse any distinction between their work life, their social life, and their political life. “Hey, that person who tweets about the TV shows I like also dislikes injustice,” which over time becomes “I can identify an ally by the TV shows they like.” The fact that you can mine a Rihanna video for political content becomes, in that vague internety way, the sense that people who don’t see political content in Rihanna’s music aren’t on your side.

When someone communicates that they are not “on our side” our first reaction is to run away or dismiss them as stupid. To be sure, there are hateful, racist, people not worthy of the small amount of electricity it takes just one of your synapses to fire. I’m instead referencing those who actually believe in an opposing viewpoint of a complicated issue, and do so for genuine, considered reasons. Or at least, for reasons just as good as yours.

Read the full article on Medium.com to learn more on how to keep your frustrations from affecting your health.